Lady Assassin a.k.a. D.T.A.'s Lyrical Queen is an aspiring singer / rapper / songwriter born & raised in New Jersey. Music is a huge aspect of her life and it has captivated her from the start.
Lady A. was born in East Orange. Throughout her childhood she surrounded herself with music as an escape from the realities of life. Singing always brought her peace & she only did it as a release. At the age of 4, she became the youngest member of her father's drill team and began learning to play the drums. In elementary school, she joined the band and learned how to play the clarinet. She continued with the band through middle school and into high school. In high school, she joined the marching band and choir. She also learned how to play the saxophone and strengthened her skills on the drums. 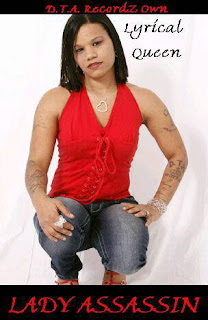 And then her life turned upside down...when Lady A. was 14, her older sister was brutally murdered, which really devastated her. Her parents got a divorce a year later and she felt as though her life was falling apart. At this point, she lost her drive for music. She stopped everything all together and retreated to just singing for herself. Going through so many different emotions from the prior two years, she started making some bad choices. Luckily, she graduated from high school but was 8 months pregnant when she did.
She became a mom at the age of 19 (she surely wasn't ready but she did what she had to do). She gave everything to GOD...she asked HIM to take the load off & help guide her. Guess what??? HE answered her prayers and she met a man that she has grown to trust with her life. He stepped into her life and helped her get focused and get it back on track. He made her feel like conquering the world. By 2005, she had two more children (a girl & a boy) and she worked as a preschool teacher. She lived a normal life and music still wasn't back in her sights (even though she thought about it everyday).
In early 2006, Lady A. became very ill and spent most of the year recuperating and getting herself back to 100%. In this time she realized that she had made a big mistake by turning her back on her love of music. So she put everything into making it right. "Life is just too short" She really stepped her game up. She started writing to get her skills up and singing hooks for other artists. In 2007, she was picked up by D.T.A. RecordZ (an up & coming Independent Music Label that’s starting to make some real noise in the tri-state area) and became Lady Assassin or Lady A. for short. The 1st Lady of D.T.A. They have built themselves from the ground up. They have their own studio, "The BlackHole", they do all of their own promotions, they even do their own CD duplication, amongst other things. She has been featured on songs with Verbal Assassin (her label mate & CEO of D.T.A.) & is in the process of collaborating with several other artists.
Knowing that she needed to concentrate on finishing her project, she locked herself in the studio (no phones, no computer) just her music, her pen & her notebook and finished her debut street CD "Welcome To My World", which was released in May 2009. It includes the hit love ballad "Cross The Desert". With over 90,000 plays on her myspace page, Lady A. is really on her way to the top. To her singing has always been as natural as breathing but while working on her 2nd CD, she tried her hand at rapping and found that to be a comfort zone. She finished her mixtape in a few months. "A Triple Threat" was released in June 2010 and on it you will find tracks with her singing, rapping and a few of both. It has always been her dream to stand on stage and captivate audiences with her one of a kind lyrical style and with her positive outlook on life and her beautiful smile, once you meet her, you just can't help but to love her. 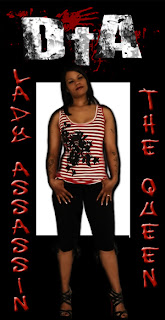 One thing Lady A. brings to the table that most female MC's lack is the triple threat of being able to rap, sing and write her own music. This gives her a certain independence that most female MC's dont't have today. In many cases, femcees on the come up are over shadowed by their male counterparts, which sometimes forces them to the back instead of being one of the featured artists in the crew. But not her...she is one of the figure heads of her team & label. With her smooth, reality based lyrics and an emotional stage presence, Lady Assassin gives a stable & strong vibe to her music that conveys a certain confidence and strength to her listeners. Just listen to her music and you will get to know her. She truly is a "Diamond in the Rough"
On September 20, 2011, Lady A. released her 3rd project entitled "It's My Time". She is currently working on her 3rd project...release date not set yet. She's also trying her hands at engineering so she's getting her skills up recording & mixing sessions. She is also very big on supporting & helping out with great causes. She is a proud member of The Sanity Gurlz Domestic Violence Movement and is currently involved in the "Oath Of Peace" Stop The Violence Movement & The Femme Fatale Empowerment Summit 2012.
Lady A. has performed at several different venues: *Diva Lounge in Montclair, NJ* *60 Park & Grill in Newark, NJ* *Mood Lounge in Union,NJ* *South Park in Montclair, NJ* *Agozar Bistro in NYC* *Gallery Bar in NYC* & just recently *The Good Life Restaurant & Lounge in Union City, NJ* and has been featured on sites such as: The Exponent, X3 Mag, Grindahz Mag, On The Rise Mag, VA Talent, Circle Of Success & Global Shyne's Meet The Artist. Take the time and give her music a chance, she is a true treasure. She has really come into her own and has become one of the baddest female emcee's coming out of the Garden State. She is definitely one to keep you eyes on!!! 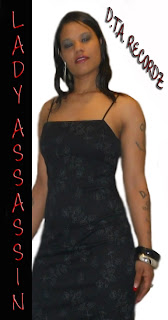 3375 First off, I love your music! In the rap world there are only a handful of women forging their way to the top – what sets you apart from the rest?

LA **Thank you so much!! I really appreciate that!! There are a lot of talented women in the rap game & I Salute them all!! I think what sets me apart is my individuality, my drive, my dedication to name a few things. I was born to stand out & I think I show that in my music, I touch on subjects that are becoming lost in today's society.


3375 Where do you draw your inspiration when it comes to writing your lyrics?

LA **Everywhere!! I take from my own life experiences, I take from my family & friends, I pull inspiration from many different places. I just want to take Hip-Hop back to where it used to be, when people could really relate to the lyrics of the song...nowadays it's just about poppin' bottles, sorry to say but there's more to life than just partying.

LA **I would love to work with Queen Latifah, Charli Baltimore & Ashanti, most definitely

3375 What has been your biggest career achievement thus far? 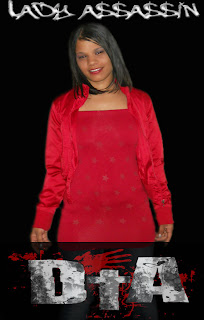 LA **My greatest achievement so fare has been the building of my Label Brand and most definitely my own personal brand. I have come across fans & supporters from all over the world and that means the most to me!! I would also say...my music period, I am at the point in my career that I am making music that I love to make with no boundaries & that is such an achievement to me.

LA **I haven't lived in East Orange for years & haven't hung out there since I was 16 lol. Nowadys, if I'm not making music or handling business...I'm trying to spend as much time with my family as I can. This life doesn't allow for much time with them.

3375 You just release 4th mixtape Pitbull in Stiletto's. What the meaning behind the title?

LA **PitBull In Stilettos means: I am a woman who knows what she wants & is willing to stay on her heavy grind just to get it. I'm attacking my music career with the aggression of a pitbull all the while doing it in stilettos, like the lady I am. Boss Lady Shit!!


3375 How do you feel about the success of Nikki Minaj?

LA **Personally, I liked Nicki before young money. But as a artist, I respect her grind...she made her own lane & is making music that she wants to make.

LA **That's kind of hard to answer...I respect so many!! Queen Latifah is definitely at the top of the list along with Monie Love, Charli Baltimore, Eve


3375 If you could perform in anywhere where would it be? And why?

LA **I would love to perform in the UK!!! I have a lot of supporters oversees & to me, they still love & appreciate real music.

3375 Tell us about the Sanity Gurlz Movement! 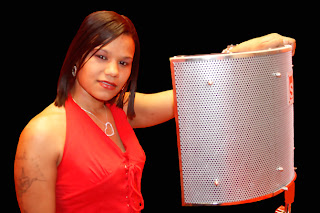 LA **Sanity Gurlz are Against Domestic Violence and Sexual Assault. We are committed to empowering victims and eliminating violence by providing education and prevention information, supporting member programs, and expanding quality services to all persons affected by sexual and domestic violence and stalking. I am currently the New Jersey Representative & I oversee all the team reps in this state & also help out in NY too. I am a child of a domestic violence household and my goal is to help as many children as I can to not experience what I had to.

3375 What your advice to someone that's in a domestic violence situation and don't know how to get out?

LA ** I think the biggest mistake victims make, is that they believe that the abuse will end & that the abuser will change, so 90% of the time they stay. If someone is abusing you...GET OUT!!! You can always contact me or any Sanity Gurl and we will make it our business to find a safe place for you.


3375 Where can they find information on domestic violence?

LA **They can always reach one of us on twitter:
www.twitter.com/SANITY_GURLZ
www.twitter.com/SanityGurlz_CEO
www.twitter.com/SANITYGURLZ_NJ
or go to our website: http://sanitygurlzdomesticviolencemovement.webs.com/
or:
If you or someone you know is in an abusive relationship and needs help or would like to speak with someone about services and options, FREE and CONFIDENTIAL help is available 24 hours a day.
You may contact the 24-hour National Domestic Violence Hotline at 1-800-799-safe (7233) to be directly connected to your local domestic violence program.


3375 Where can they buy your mixtape and contact you?

LA **All my mixtapes are available for free download...all you have to do is google me lol. The newest mixtape "PitBull In Stilettos" is available on like 12 sites at this point: 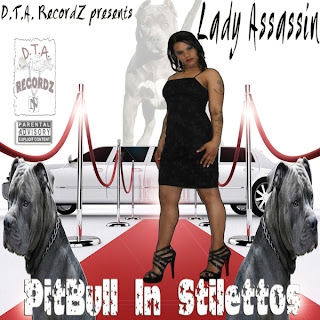 LA ** S/O to my team D.T.A. RecordZ!! We workin' "All Gas No Brakes"
S/O to my BallyBoyz & KushQueenz!!
S/O to yall!!! Thank you for all the support you have shown me...it's truly appreciated!!
#DTA #SALUTE to all my loyal friends, fans & supporters!! Thank you for continuing to ride out with me on this journey!! I appreciate all your love & support!!
BIG S/O to all the DJ's, Bloggers & Radio Stations that promote & play my music!!
Be on the lookout for my new mixtape dropping in September!!
Posted by 3375 Magazine at 9:28 AM