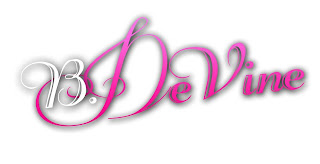 B.DeVINE or DeVINE, as she loves to be called is an emerging Jacksonville, Florida based


singer-songwriter-poet who’s lyrical and vocal style stir up an influence reminiscent of
musicians such as Floetry, Jill Scott, and India.Arie.
DeVINE jokes that if Prince and Jill Scott could have created a love-child it would have been her! A singer since she could remember and a songwriter since she entered puberty, DeVINE found herself drawn to all types of music, from R&B to Techno and anything in between. After working countless hours in several studios around the city and lending background vocals for numerous local artists, she was chosen to perform with Psycster (a local Hip-Hop recording artist), to headline for Ja Rule, Mr. Cheeks, and Khia. This concert was ultimately the last concert to be held in the Jacksonville Coliseum before its demolition. After that time, she met Al Ross, an arranger and producer with 33 1/3 Productions, who eventually introduced her to Tony White, another talented Jacksonville native, who would become her mentor and self-proclaimed biggest fan. Over the next ten years, the two of them would collaborate by writing and arranging their own music. Recently, DeVINE wrote/co-wrote three songs that appeared on T. White's debut CD, Street Love. She also recorded and performed the CD's intro, "Honeydripper Lady" and was featured on "Rather B" another popular song from the CD. The album is still currently available on iTunes for purchase. In late 2010, DeVINE finally decided to embark on her debut project. A decade in the making, she carefully selected poems written for what she still hopes will be her first book, to be a part of her spoken word project. After completion, DeVINE along with a few others from TyTeWork Entertainment, quickly realized that there was very little exposure for the type of music they created. Armed with only an idea and ProTools, she decided to form her own genre of music, affectionately named Pornetry, due to its infusion of intimacy-based spoken word with smooth melodies. To put it simply, it is Erotica set to music. Literoticism, another term coined by B.DeVINE, is the ability to create and/or heighten sexual pleasure through literature. B.DeVINE is excited to share "SoulBareHer" with the world. Once B.DeVINE's project is unveiled, the temperatures in Florida may get a tad bit hotter thanks to this seductive entertainer 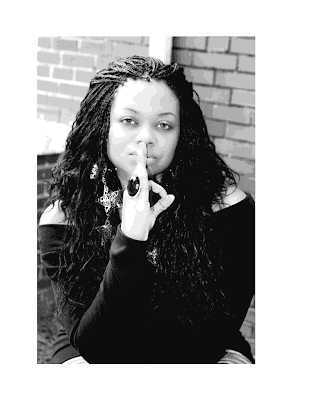 3375 When did you first start singing?

B.DeVINE I would have to say my earliest memory is around 8 or so, I started singing in the youth choir at church. I have always enjoyed hearing songs in harmony and learned the technical side of discovering notes in music from my mother as a kid.

3375 What did your family do to encourage you?


My family supported my decision to pursue music in church, school, and our community. My mom encouraged me to compete in local pageants, talent competitions, as well as youth community choirs. I studied music from grade school through high school.


B.DeVINE My maternal grandfather, my paternal grandmother, my mother & father, all of my aunts and uncles on my dad’s side, four of my siblings, and quite a few cousins on both sides of the family can sing & play instruments. Oh my goodness, I didn’t realize it, but over half of my family can sing and/or play a musical instrument.

3375 Who are your musical inspirations?

B.DeVINE I have too many to name, but if I had to pick my top five musical inspirations, I would have to say my mother who can bring tears to your eyes with her rendition of Madame Butterfly, Lalah Hathaway & India.Arie, who have an edgy lower vocal tone that I (as a content alto) just adore, Jazmine Sullivan because she so young but has the voice with the soul of Nina Simone, and last but certainly not least, Prince…his range, his vocal ability, and his knowledge of so many different instruments truly astounds me.

3375 What kind of music do you listen to today? 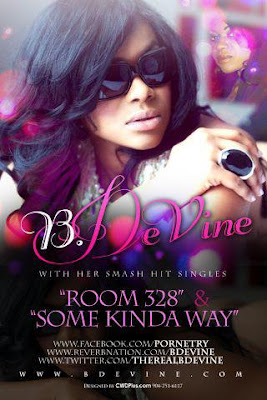 B.DeVINE I am a lover of House music; believe it or not, this genre has been my favorite to listen to since middle school. I also love Ambient/Chill, Classical, & Gospel music…I have a very diverse playlist right now!

3375 What embarrassing songs might I find on your MP3 player?

B.DeVINE I don’t think any song would be embarrassing for me because I truly enjoy listening to all types of music from Soundgarden’s Black Hole Sun to Mozart’s Sonata No. 11 in A Major. If a song shows talent in writing, production, and vocal ability…I will automatically be a fan!

B.DeVINE I would love to perform in Europe or somewhere else abroad. There is such a true passion for great music outside of the US and I feel like I would be embraced for being exactly who I am, a vocalist who happens to also be a spoken word artist. I just want to share good music with whoever wants to listen, wherever!

B.DeVINE I would love to open for Marsha Ambrosious, with her being a former member of Floetry; I feel that my style of music would be like a breath of fresh air for her… reflective even. Ultimately, my dream is to perform on a stage with people I have admired over the years in music.

B.DeVINE I have a Master’s degree in Criminal Justice, I have always wanted to work with the FBI, so I most likely would have pursued a career with the government.

B.DeVINE I really want to learn to play the piano and acoustic guitar, but unfortunately, I am not where I would like to be with those instruments just yet. Ask me again, in about two years…hopefully I can say YES, with confidence.

3375 If you could dabble in another genre of music, what would it be?

B.DeVINE Ambient House, this form of music is so chill; it is so different than anything I have ever heard. It relaxes me and allows me to truly get in touch with my vocal abilities and honestly, if it were more “mainstream” I would certainly give it a shot!

3375 What genre of music can't you stand to listen to? 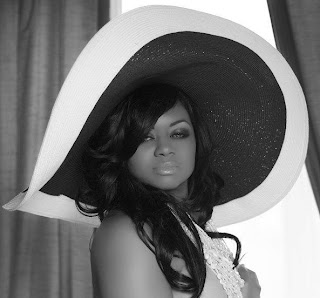 B.DeVINE I haven’t heard a genre that I “can’t stand” per se, but I will say the Hardcore Rock (where the lead singer screams every word) is certainly not my favorite.

3375 What hidden talents do you have?

B.DeVINE I can sing my alphabets backwards. I memorized them as a kid and I guess it just stuck with me. All of the others are for me to know and for TMZ to never find out.

3375 Do you enjoy writing music and/or lyrics?

B.DeVINE Yes, absolutely, I can always count on writing poetry and music to ease my mind and help me get through some of my toughest times. Writing has actually been like therapy for me and I don’t know what I would have done without my gel pen and my composition book.

3375 Where can we listen to your music and contact you?

B.DeVINE Of course, first I must SALUTE my family (immediate and extended) for supporting me through the years as I transition my music from being much more than just a hobby. I love you more than words can capture! I would like to THANK Tony White with TyteWork Entertainment for the amazing production and mentoring over the last decade, I have truly grown up creating music with you and I hope we continue to make it B.eautifully! I would like to THANK Mrs. Dana with The LMS Group for believing in my talent enough to tell someone else and for standing firmly behind your word; no words could express my gratitude for your friendship and support! Finally and most importantly, to everyone who has ever purchased, downloaded, liked, followed, posted, & reposted anything about B.DeVINE…I appreciate ALL of you and your efforts individually and collectively! THANK YOU!
Posted by 3375 Magazine at 9:58 AM