INTERVIEW WITH UP AND COMING COMEDIAN LISSA P 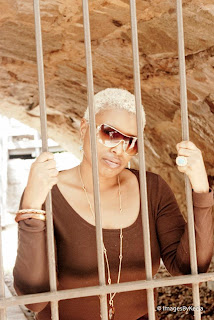 Comedian Lissa P was born July 6th, 19yea right (lol) in Richmond Virginia. She WAS the youngest of 3 girls until her mother adopted her cousin (@ the age of 7) who is now a theater writer/performer in Chicago Ill.


Since Lissa P was able to talk she could never keep her mouth shut (just ask ALL of her teachers, from elementary, middle AND high school…sad but, true).


Lissa P always knew it was in her blood to bring laughter to people’s hearts & souls.


One day in conversation a co-worker stated that a local Comedy Improve Troupe in Richmond was holding auditions and I, me (new to the game) Lissa P should try out. Indeed, I auditioned and became a part of the “Richmond Comedy Sports Improve Troupe” spring of 2007 until winter 2008.


After exploring a year in the Improve world Lissa P started to spread her wings into performing stand up in other venues in the surrounding areas of VA. Her first big step was gracing stage of the well known Richmond Funny Bone May, June & August of 2009.
After entering in the Richmond Funny Bones “Clash of the Comics” open mic competitions in May, June, in August (the finale) Lissa P became the 1st female EVER to place top 3 in a “Clash” (Lissa being the only SEXY chick out of 11 dudes..that was a HUGH honor.
Lissa P thanks her father for introducing her to the world of comedy. Since she was 5yrs old her father would have her on his lap @ 8p to watch the Benny Hill Show (a British comedy that ran from Jan. 15th, 1955-May 30, 1991). Lissa P feels that comedy/entertaining/hosting.. is in her blood & it’s here to stay!! 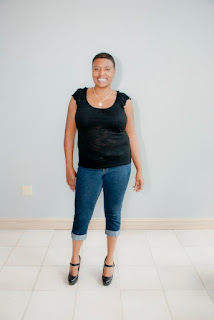 LISSA  Lissa P is a funny, out of control (when needed) up & coming Comediennes. I've been in the entertainment field of comedy since 2007 but, in my soul since birth : ) I am a very caring, loving, (which is soo common for a zodiac Cancer, July 6th baby such as myself..OOW OOW!!) like to going to the movies, working out, shopping for shoes, Cowboys fan (but, if they aren't doing well by the 4th quarter I usually go for the other team)!

LISSA   Relatable Life!! Point Blank. 9 x's out of 10 anything that I talk about has happened in my life and somehow some way you'll be able to relate. People always say "Tell me a joke" & I ask them "how much time do you have b/c we have at least 20+ years to cover" LOL!

3375  It seems like everyone is getting into music, why did you choose comedy?

LISSA   B/C I can't sing..LOL so, my music career would have been over w/ the first note! I'm not the one who listened to my mama when she said "gone sing baby" nay i listened to my daddy when he said "make em' laugh before they laugh at you".

3375  When did you realize your talent or gift?

LISSA  1st grade. We would go on the playground in the evenings and I would entertain my friends. We had this game  where each person (about 8 of use) would go across the monkey bars one by one & as each person went across we would have to cheer the loudest for the person who we wanted to go across again & again just to do silly stuff. You guessed it! I got the loudest cheers. Ay-dont knock this game we were ONLY in 1st grade.. geesh!! I think the loud cheers and seeing that I could put smiles on peoples faces felt good & most of all it was priceless.

3375  Who do you think is the funniest comedian of all time?. 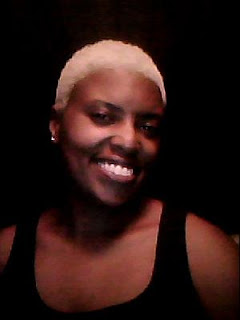 LISSA  WOW, funniest of all times???? It's hard to pick just one but, I would say Mr. Richard Pryor!

3375  Do you have a certain age group for what you do or your act is for everybody?

LISSA  Everybody! You just gotta let me know ahead of time what the age group will be..lol When I started off doing comedy @ Comedy Sportz Improv Theater in 07'. those shows were family friendly (my grandma went so, your kids were safe)

LISSA  WOW. My first time on stage was @ Comedy Sportz & that wasn't to bad b/c I was on there w/ other players on there w/ me but, my first solo performance was @ the Richmond Funny Bone & b/c it was on my mom's birthday (May 4th)  I knew she was watching over me so, I was actually ok! For some reason stage fright comes along every now & then but, it subsides once I open my mouth!

3375  Tell us 2 things you will want our readers to know about you.

LISSA  1.) I trained to be a EMT before I started comedy but, cried over every patient we picked up SO, I knew I was ONLY meant to make people laugh once they felt better. 2.) I'm a crybaby..lol 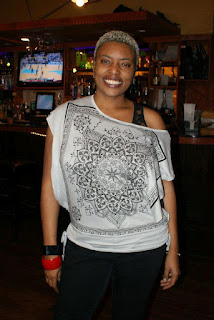 3375  How can we keep updates on performance?

LISSA Facebook @ "Comedianess Lissa P"!
My next performance will be Saturday July 21st 2012 for the Tropical Diva's Plus Size Fashion Show @ the Glen Allen Cultural Arts Center. Check out their website for ticket information!!


LISSA  My mom & dad Mary & Clarence Smothers (Rest in Perfect Peace..thank you for EVERYTHING) ,my sisters Kim, Annette, Melanie & my cousins (Jody). Jay Grizzy, VCU's J-Lowdown Show, REPVA Radio, Ain't No Half Steppin' w/ Marcus J Internet Radio,  the Aaron Turner Show & the Richmond Funny Bone. To anyone I may have left out charge it to my head and not my heart! Love to you all & thank you to 3375 Magazine!! 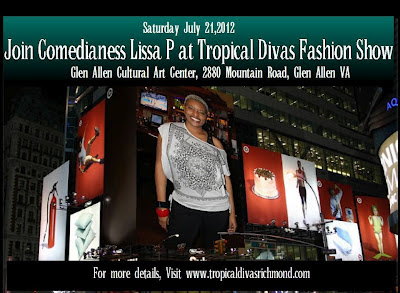