INTERVIEW WITH UP AND COMING MUSIC ARTIST MOODA 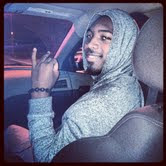 I started writing music at the age of 7, but I didn't take it serious because football was and still is my life. I didnt start taking rapping serious till 2013 when I put together a group of young new artists. When I released Take Flight people said I had talent. My name is Quester Campbell but my rap name is Mooda. I recieved this name from my cousin who is also called Big Mooda. So it sort of stuck with me. Im from Baltimore Md, played high school football at Perry Hall High. Currently finishing my senior year there, me and my group are currently working on a group project debut mixtape "Life Long Dreams" - Mooda


3375  Tell everybody your name and what area you represent?
MOODA  My name Mooda Z, I represent B.M.A Belair rd aka da rd aka zone6 aka uptown lol. Baltimore Md.
3375   How long have you been doing music and what made you get into music?
MOODA  I been free styling since I was 7, doing little things in front of my mother. My friend of mines 40 aka leam valley told me I had talent I should take it serious so he actually jump started this whole BMA movement
3375   How would you describe your style and best attribute as an artist?
MOODA  My style is like simple but different. I don't really talk about the average thing that most baltimore rappers talk about, I just stay in my lane. My best attribute would be my swagger and confidence.
3375   Tell us your greatest experience thus far as a music artist and why?
MOODA  My greatest experience would be having a cameo in my big cousin Soduh "The Krays" video ft asap ant n al Rogers.

3375   What is the biggest challenge you face being an artist?
MOODA  Biggest challenge is trying to be put on the map as far as a Baltimore rapper cause most of us don't get that recognition n more times we better than some mainstream rappers lol.
3375   Who would you like to collaborate with in the music industry and why?
MOODA  I would like to do a song with Asap Rocky, Chief keef, and prolly Currensy. They bring that energy and vibe to a song.
3375   So how do you feel you rank against top music talents today? And why?
MOODA  I mean I'm young n I'm just getting started foreal,  let me get couple mixtapes n shows under my belt n we will see lol.
3375   What are you working on now, and when can fans expect to hear more from you?
MOODA  Right now I'm working on the group debut mixtape dropping sometime in the spring. I'll be dropping 3 songs on March 29 so be on the look out for them, my soundcloud is UptownEmpire.
3375   Give my readers one tip about pursuing their dreams?
MOODA  Some tips is never let nobody steer you away from ya dreams, always do it cause you wanna do it n that's what you love, one more thing keep God first n everything else will take it's place.
3375   So what do you want to accomplish as an artist overall?
MOODA  I just want people to hear my crew music that's all...
3375   If music never existed, what do you think you would be doing?
MOODA  Of course playing football, they both are my #1 passion.
3375   Tell us your influences and inspirations?
MOODA  My influences would be 2pac, Young Jeezy, Soduh, and Currensy.
3375   What do you think of the “R&B and Hip Hop music world right now?
MOODA  It's cool, I mean I listen to everything.
3375   What quote do you feel best represents you?
MOODA  "It's the World" Young Jeezy
3375   What music do you have playing in your sound system right now?
MOODA  Right now I'm listening to Czar Krash Ep 18 go download that on datpiff.
3375   How can business heads and fans contact you in the future?
MOODA  Y'all can hit me up on twitter @_ray_bands and IG @raycam3 https://soundcloud.com/#uptownempire-1 or my email for bookings quesscampbell@yahoo.com
3375   Do you have any shout outs?
MOODA  Yea mane shout out to the fam back home 5100, BMA, Czar Krash, My homie Soduh n Ccls, everybody in the 410. Free Chuck n Free Mike ! Lets get it Z !